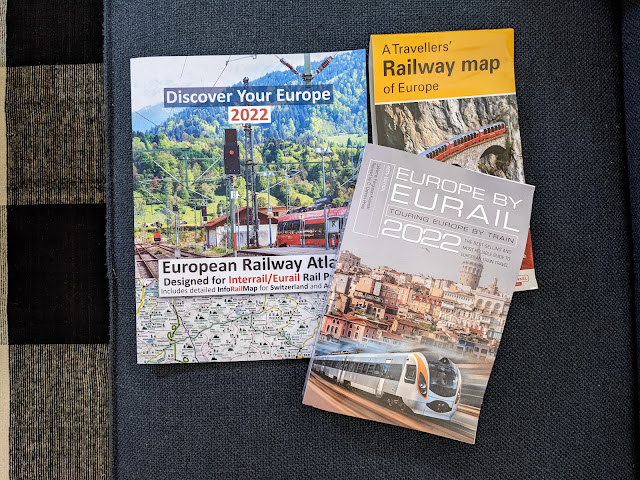 My OH and I were very lucky to grab two Interrail Global Passes last year in their 50th anniversary half-price sale: First Class, unlimited train travel over three months. I have been reading, researching, and reserving both seats and accommodation all winter, and we are pretty much ready to hit the tracks in several weeks. Part One sees us heading to Sicily - we visited the east coast pre-Covid and loved it - and I cannot wait.
Posted by Lynn at 7:28 AM No comments:

That detour down Memory Lane 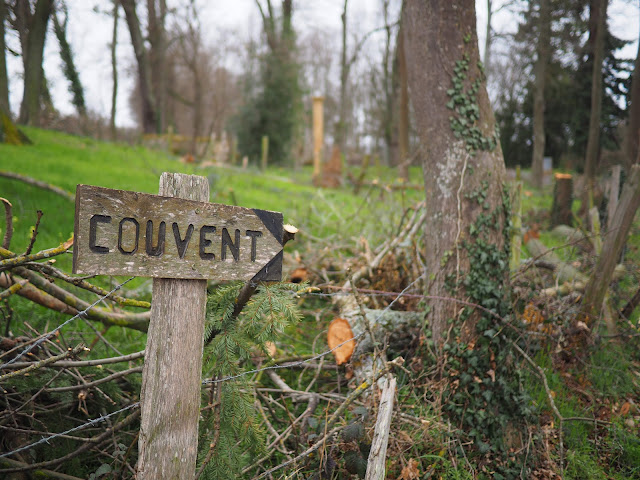 So. We returned, the two of us, to this place nestled so joyously in my memory, dusted with the sweet nostalgia that many of my age seem to cherish. (I know I do.) 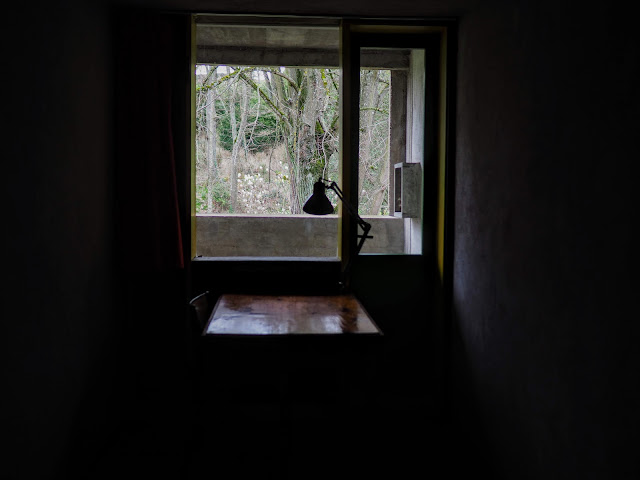 Our "cells" were exactly how I remembered them: austere, authentic, slightly musty, but oh-so-quiet, and the tiny balconies opened to the hills and the forest. They're only for sleeping anyway, right? The bathrooms seemed very far away, and we were the only guests, so my hike through the corridors to the ladies' facilities was slightly surreal. 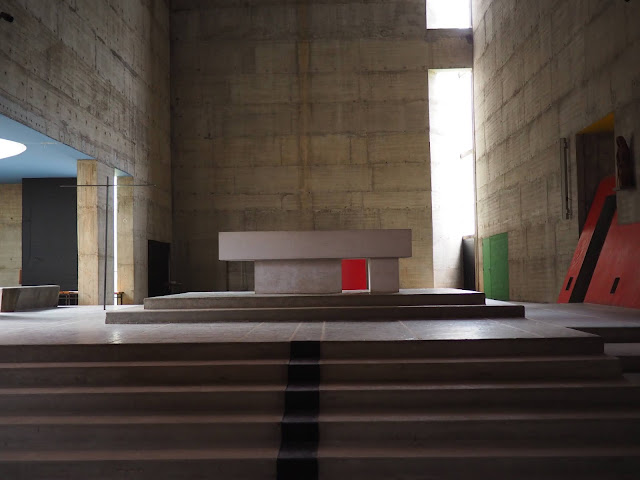 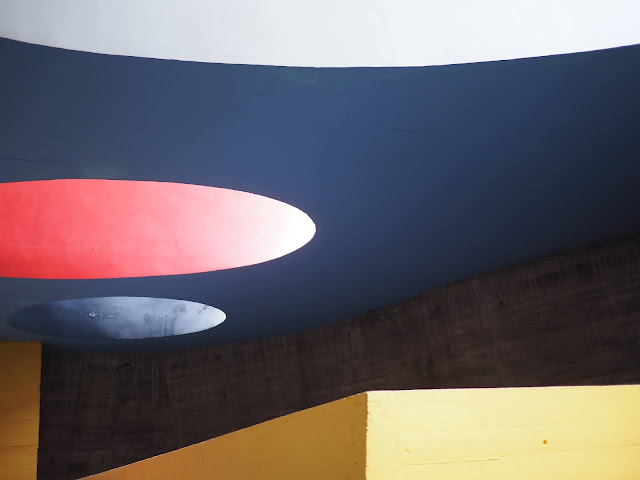 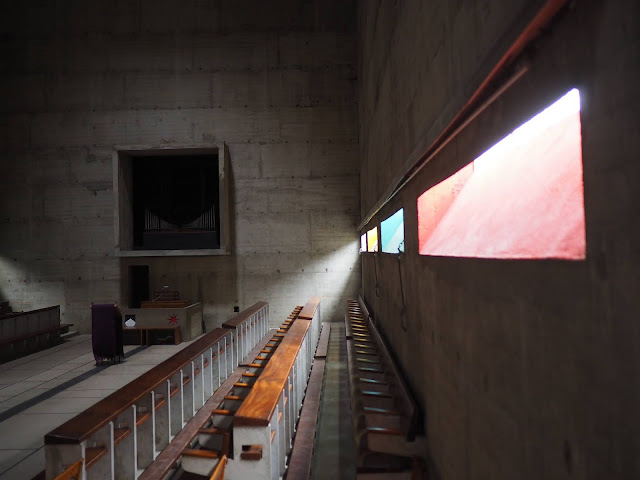 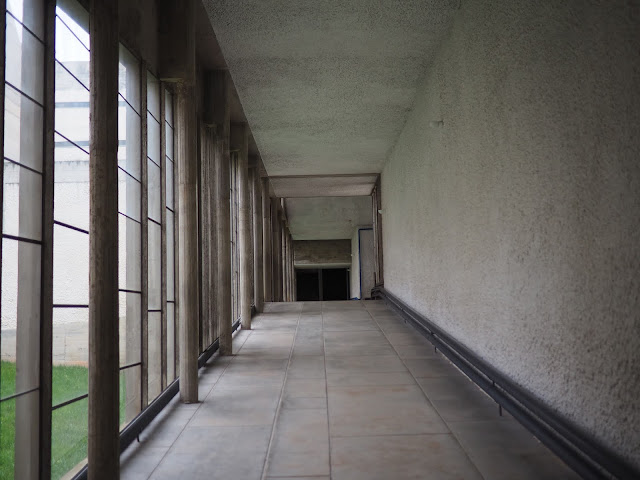 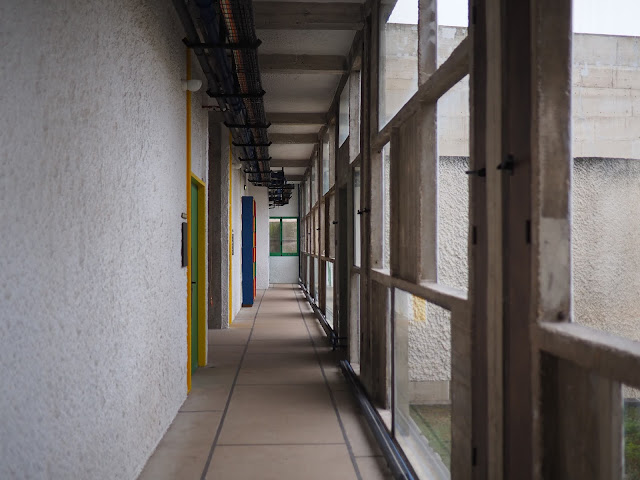 Most surreal, though, was our dinner experience. Keep in mind my memory: refectory, generous table, simple and delicious food, carafes of vin ordinaire, and the company of the brothers, lively conversation.
Not this time. Guests eat, these days, apart from the residents.
We settled into a corner of  an empty dining room, and - after a brief explanation by a very friendly monk - our dinner appeared by dumbwaiter. We ate quietly; the food was definitely not hearty or homemade; we loaded our empty plates into the dumbwaiter as instructed, and that was that. 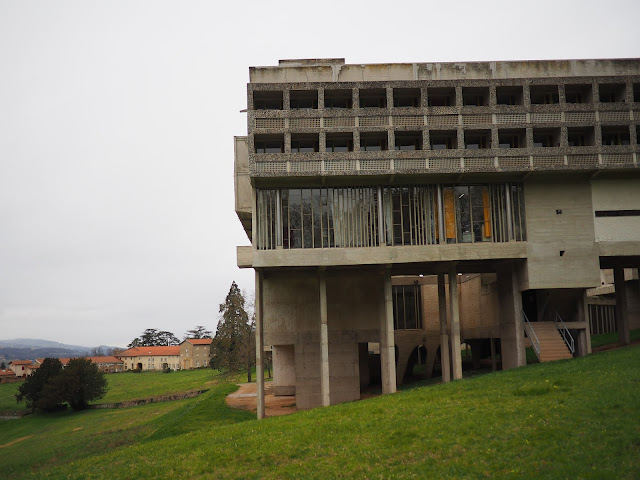 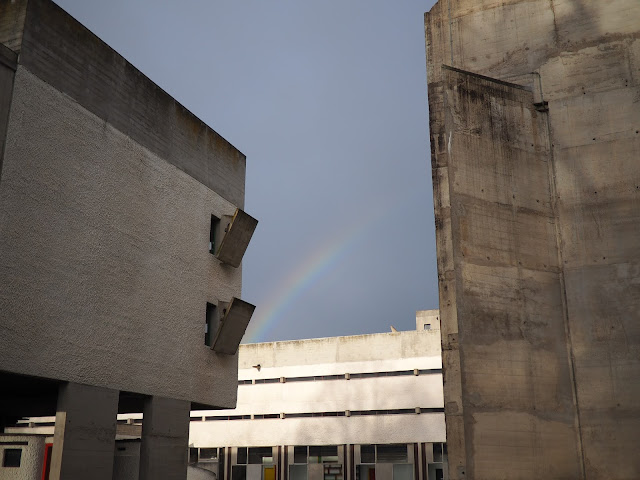 We did, however, take a lovely walk up into the hillside, and admired the brutalist architecture from all angles.
It was an experience. But it did reinforce my belief that - in most cases - returning to a location rich in very special memories isn't always the best course of action.
Posted by Lynn at 8:09 AM No comments:

those were the days


Many, many, MANY years ago - fall of 1976 to be exact - my best-friend-from-high-school and I found ourselves hitchhiking through France. as part of our great European Adventure. She had a wishlist; I had a wishlist, and one of my priorities was the Monastery of La Tourette.*

*One of my favourite people, ever, was a friend of a friend: James Adams. He was, at that time, a student of Architecture at U.of T. In the course of his studies, he and a friend embarked upon a (sponsored?) sabbatical, with a view to visiting the architectural wonders of Europe. I was an au-pair in France, and later Spain, at the same time, and was lucky enough to share some of that inspiration with them: Notre Dame du Haut, Chinchon, Cuenca. But the rest of those wonders? Noted. For later.

So: later? Me, best friend, thumbs out, France? We arrived at La Tourette  late on an autumn afternoon. We were shown to our "cells". We joined the monks for supper, shared food, wine, conversation. I talked most, as I spoke French. And I have never forgotten the warmth of that refectory, and those people.

In a couple of weeks, my husband and I will be settling into "cells" at La Tourette for a single, special, wonderful, nostalgic night.

I'll let you know how it goes. 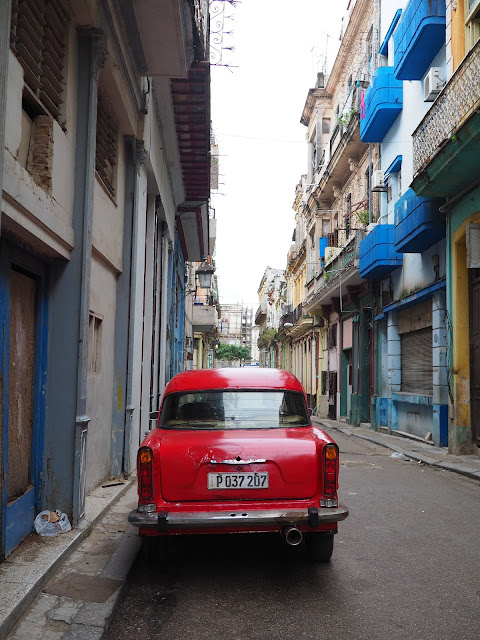 And then there was Cuba. And it was brilliant beyond measure. A step-by-step (mojito-by-mojito) is forthcoming.
Posted by Lynn at 11:42 AM No comments:

A Month in Myanmar: take two

We did get to Myanmar in the end. It was glorious, well worth waiting for, everything we hoped and more than we expected. I'll just share a few of the endless (photo) highlights here, and then break down the itinerary and the choices we made in future posts. Suffice it to say: I am still sighing, a year later, with the wonder of it all. 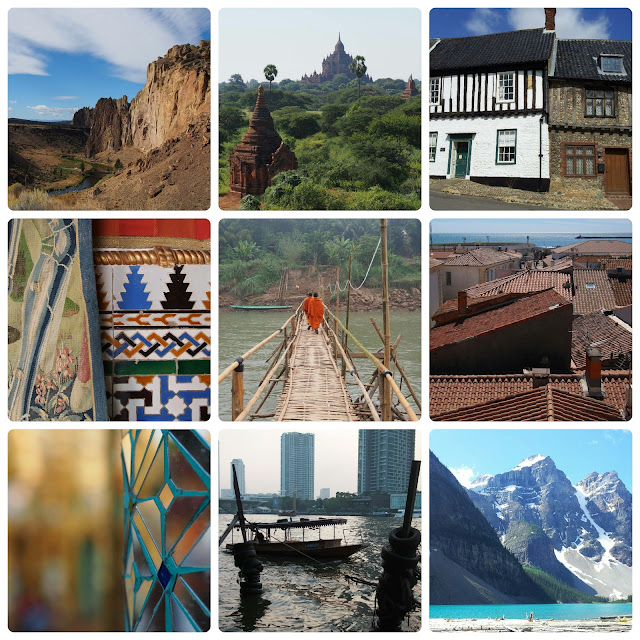 When I founded this little hamlet on the Internet a couple of years ago, I had grand and honourable intentions: I wanted to demonstrate to the world at large that people approaching/of retirement age (like me!) can still set off, explore, and experience new and exciting destinations. Not only that, but they can do it without benefit of a travel agent or a tour operator....and certainly without traipsing about behind a waving flag and a stopwatch indicating just this many minutes to see what needs to be seen. And they can plan every adventure themselves!

I entered a kind of competition the other day. One of the best travel food bloggers ever (Mark! Migrationology!) posted a link to a Star Alliance contest. The prize? A RTW  trip for two!  My dream of dreams! Can you imagine the photographs I could take? I have zero hope of winning, truly, but I really do believe that the "older" market is an untapped one. Not everyone can muster enthusiasm for a bus tour with included everything.

As I said: no hope of winning. But I do hope that we going-grey-but-still-fit adventurers become a recognised faction. If there was a vote involved, I would smile disarmingly and hope for the best,  but all I can do now is raise a bit of "honoured-citizen-awareness". :-) 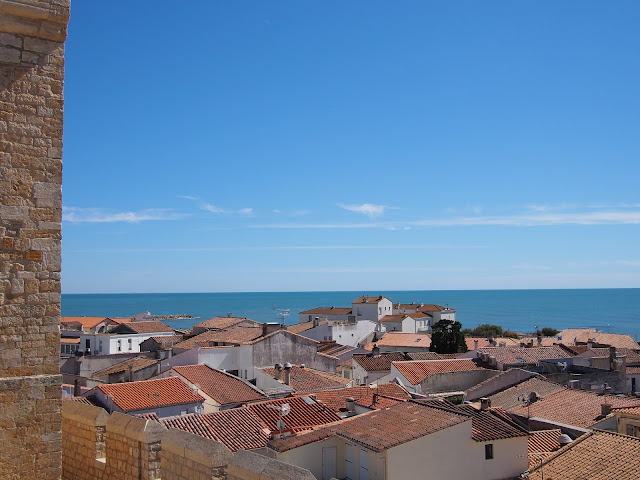 Years and years and years ago, on a rainy, cold November day in 1976, my friend Joanne and I took the bus from Arles (where we were staying) to Saintes-Maries de la Mer. I travelled, back then, with my head in the clouds, and with plans based mostly on beautiful photographs I had happened upon in National Geographic and travel agency folders, so I expected to see red roof tiles, sea, salt flats, and wild white Camargue ponies pretty much all in one glance. But, yeah, it was November, as I said, and grey and miserable, and the town was deserted during low season. All the shops were shuttered, and not a single café or restaurant was open.  The tile roofs were red, yes, but slick with rain. The seaside was empty and desolate, and -- silly me -- the salt and the horses too far away to visit on foot. We took the next bus back to Arles, and I was terribly disappointed.

Les Saintes-Maries were given a second chance last week, when my husband and I drove down to the Mediterranean coast from our holiday location in the Cevennes. The weather was glorious, and the town bustling. We saw the Camargue ponies on our way there, and the salt flats on the way back. The view from the roof of the church was spectacular. The sea was blue. 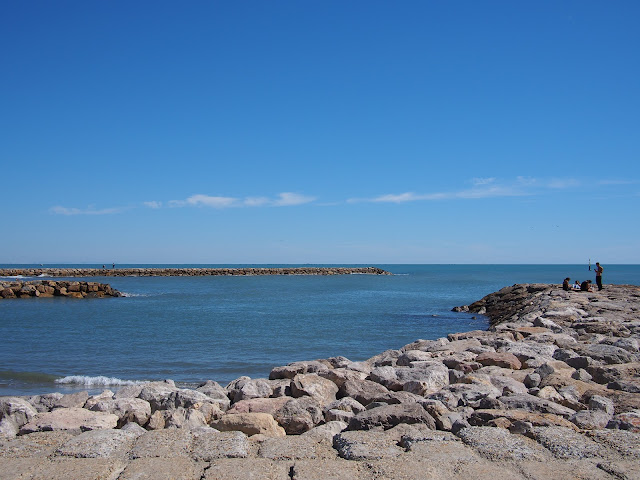 This time, four decades later, the town was alive with tourists, and all the shops and eateries were jammed. Rather disappointingly, souvenir stalls outnumbered businesses aimed at locals, and a slightly tacky tour-bus atmosphere prevailed, but it was good to experience the town awake, instead of sleeping, and to replace my monochrome memories with infinitely more colourful ones. 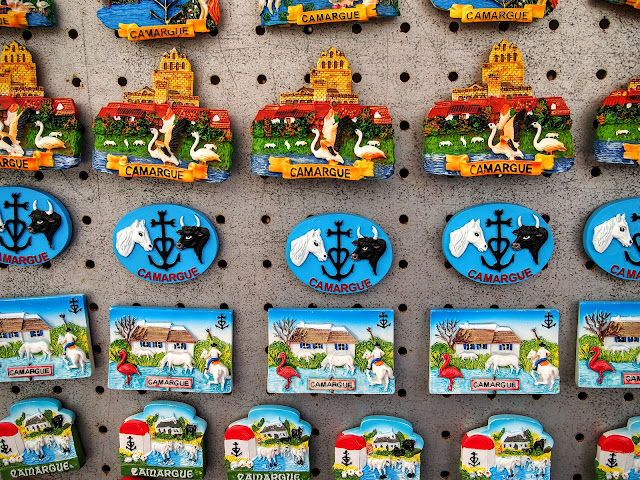 Lynn
I have been sharing my pictures, and my thoughts, for nearly two decades now.

Snapshots, and sometimes stories, of travels then and travels now.